I don't really understand BP's stock price. Is the company worth more than the tourism and fishery industries of Louisiana, Mississippi, and Alabama?

What do you think the oil spill will cost?
Posted by Will Mackin at 9:10 AM 0 comments

I am in denial; Cross your fingers for Cay Sal Bank

I returned from the Cay Sal Bank Rapid Ecological Assessment on Wednesday. The Bank is amazing. Fisheries, Coral Reefs, Sea Turtles, Seabirds, and long, perfect beaches. Now let's just cross our fingers and hope for a miracle that spares the Cay Sal Bank.
Posted by Will Mackin at 8:50 AM 0 comments

Article in the Nassau Tribune about the Cay Sal Assessment

The Nassau Tribune has a story about our trip. I'm in Nassau now getting ready to head out tomorrow.

The Bahamas National Trust, the Royal Bahamian Defense Force, and the Government of the Bahamas are sponsoring a rapid assessment of the Cay Sal Bank land and water resources. I leave for the trip tomorrow.
Posted by Will Mackin at 9:09 AM 0 comments

In today's Press-Register, Dave Helms reports that wildlife officials give a total of 10 oiled birds from Louisiana and 4 from Mississippi, Alabama, and Florida combined. The lone occupant of the wildlife resource center in Theodore, AL was a royal tern that was found oiled but is recovering after being cleaned.

I'm using a Google Feed to monitor all reports about injured wildlife. I'll post links as they come in.
Posted by Will Mackin at 5:48 AM 0 comments

Species Profiles for Seabirds in the Gulf of Mexico

In work for NOAA, Dave Lee prepared species profiles for all the seabirds in the Gulf of Mexico. This guide might be helpful to volunteers and workers trying to prep for fieldwork or to identify oiled or dead birds found.


http://www.wicbirds.net/gomprofiles.2pdf
Posted by Will Mackin at 9:46 AM 0 comments

Extent of the spill after three weeks

The Horizon Spill has been ongoing for three weeks. At this point, it has affected all the waters of Louisiana. There is an awful lot of crude on the water surrounding the well that has not gotten to land and has not yet gotten into the Gulf Stream. The news media has lost interest. If they don't shut it off soon, it will cover the entire Gulf Coast from Galveston to Pensacola.

They are performing necropsies on over 100 sea turtles and a handful of dolphins that have washed up on the beach. The number of dead birds out in the pelagic waters around the well head and up in the breeding colonies is not being reported.

Seabirds on the Cay Sal Bank

Outside of the Gulf Coast Shoreline, one of the areas in greatest threat from the oil spill is the Cay Sal Bank. This seamount southeast of Florida and north of Cuba is a giant sandbar at the point where the Gulf Stream splits and heads primarily north towards Florida with that small stream moving east along Cuba's Coast. The bank has fantastic coral reef ecosystems and a series of limestone cays around the edge of the bank. Because it is remote and inhospitable to humans, it retains large seabird populations.

The dean of Bahamian ornithologists, Alexander "Sandy" Sprunt, who recently passed away, estimated a total of 800 Bridled Terns, 20,000 Sooty Terns, and 3,500 Brown Noddies nesting on the cays on the bank in 1996. No formal surveys have been conducted since then, but we do have reports from Haitian refugees who were stranded on one of the cays and survived by eating Audubon's Shearwaters.

This site is known for its birds and its coral. Both are in danger from the oil spill. I hope we can get some survey teams out this summer to assess the status there.
Posted by Will Mackin at 11:00 AM 1 comments

They are only forecasting one day ahead. I have yet to find any forecast of the location of the plume of water with oil dissolved into it from the dispersants used.

It's very strange how the spill extent jumps across tens of kilometers of oceans each day. I guess that results from the 1.5 Km depth of the sourcepoint.
Posted by Will Mackin at 7:45 AM 0 comments

Currents leading from the Spill to the Gulf Stream

I have been surprised by the path that the oil slick has taken, until I looked at the images on this website from the University of Miami: http://oceancurrents.rsmas.miami.edu/atlantic/spaghetti-speed/florida.jpg

The Gulf Stream originates as a loop current coming north from the Yucatan and turning south at a point roughly several hundred kilometers south of Pensacola, FL. It turns east at the north Coast of Cuba and then mostly runs north to Florida as the Gulf Stream, with a small stream slipping between the Bahamas and Cuba and running ESE.

The oil will stay mostly contained near the coast of Louisiana, Mississippi, and Alabama until it spreads into that loop current and begins to enter the Gulf Stream. If they can contain it within the gulf, they can likely save a great deal of marine life.

I will post a link to a forecast from an oceanographer as soon as I can find one.
Posted by Will Mackin at 6:41 AM 0 comments

Surveys of Cetaceans, Seabirds, and Turtles in the Spill Area

Minerals Management Service has publications on the seabirds and other marine life in the drilling areas. The link (http://www.gomr.mms.gov/PI/PDFImages/ESPIS/3/3153.pdf) has a large report from 2000.

There are lots of dolphins and sperm whales living in the area. Huge numbers of Black Terns occur there in mid-summer but won't be there right now. Loggerhead and Leatherback sea turtles are fairly common.

Among seabirds, laughing gulls are the most common birds. No Black-Capped or Bermuda Petrels were detected, but Band-Rumped Storm Petrels and Audubon's Shearwaters were the most common members of their respective families that were documented.

The surveys were exactly in the area of ocean where the spill is centered. The animals feed along the continental shelf. Hopefully, the same survey ships are in the area and will be going out to document the damage and rescue any rare animals they can.
Posted by Will Mackin at 8:51 AM 0 comments

Dave Lee on the Oil Geyser

The Oil Spill and Caribbean Seabirds 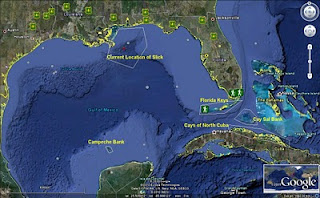 The ongoing oil leak in the Gulf of Mexico gravely threatens wildlife throughout the Gulf and leading into Florida, Cuba, and the Bahamas if the slick is carried off on the Gulf Stream. The most recent reports indicate that 5000 barrels of orange crude oil per day are leaking from the well-head, which is about 1.5 km underwater.

There will be a minimum of resources available to help birds, and rare species should receive priority over common ones. Fortunately, most migratory waterbirds will have left the Gulf wintering area already. This leaves rare birds that breed in the area as the primary targets of recovery efforts.

Masked Booby populations in the Caribbean and Gulf of Mexico are extremely low (~4000 pairs) with the majority (3500 pairs) on the Campeche Banks, just north of the Yucatan Peninsula. While we know little about the at-sea movement patterns of Boobies and other seabirds in the West Indies, the slick area is 700 km north of the Campeche Banks, easily within foraging range of the Boobies actively nesting there. This spill could devastate the population.

The major populations of seabirds (and other marine life) in the Florida Cays, Northern Cuba, and the Cay Sal Bank of the Bahamas are directly threatened. The Cay Sal Bank has fantastic coral and fish populations and thousands of nesting pairs of rare seabirds including Roseate Terns and Audubon's Shearwaters. Populations in the Florida Keys and the north shore of Cuba are also globally significant, with several Important Bird Areas recognized.

There are scant data about areas in the path of the slick that are of high importance to seabird foraging. The plume is likely to track the continental shelf break to the tip of Florida. This area is likely to be used by pelagic birds such as Black-capped Petrels and other species with tiny remaining populations.

Even if dispersants are used successfully and the major oil slicks are broken up on the ocean, some of the oil will be taken into the food web and eventually end up within the seabirds and large fish. The spill is another blow to an already degraded environment.


Here is a list of 49 Seabirds that occur in the Gulf of Mexico (compiled by Dave Lee):