Most of Wicbirds.net is now operational again. I'm still debugging a few pages and images, but the account is transferred over and the text about each species is online. Let me know if you find any issues.
Posted by Will Mackin at 7:30 AM 0 comments

API has been running an ad on Google adsense that shows up on our blog! If you watch the ad, the president of API points out that they've drilled thousands of wells in the Gulf of Mexico and produced billions of gallons of oil and cubic feet of natural gas, but that this event indcates that they need to reexamine their practices so they can keep their employees safe.

While I agree with the employee part, they totally left out the environmental part. What about all the invertebrates, fish and birds? What about the fishermen that can't make a living any more? What about the beach communities that will go under when their tourism revenue goes away? It's fairly offensive that they would make a statement and not mention all those lives they've ruined, but to be honest, it's not much different than anything they've said in the past. I would not want to be those people in 20 years after they've led the charge against doing something about climate change and stonewalled for decades. They will be history's villains. Watch their ad if you want. I'm all for openness, even for chronic deceivers, but I could not let it sit on my blog without a response.
Posted by Will Mackin at 11:52 AM 0 comments

This report, if true, is hard to take sitting down.

WICBirds.net is down right now

If you're looking for WICBirds.net, it is down temporarily. I apologize for this delay. It's a problem with the Verizon-Yahoo breakup. I'll have it up ASAP. Until then, if you would like to see Dave Lee's identification guide for birds in the gulf, email me and I will send it to you electronically. Likewise for any information about the breeding sites.
Posted by Will Mackin at 5:41 AM 0 comments

David Lee, the co-editor of this blog, has been studying the seabirds of the North Atlantic since before I was born, literally. As curator of birds at the North Carolina Museum of Natural Sciences in Raleigh, he spent thousands of hours observing and collecting seabirds off the coast of North Carolina, and he discovered, among other things, that the productive fishing area off of Hatteras Island called "The Point" by fishermen is also a critical feeding area for the rarest seabirds in the Atlantic Ocean, including Fea's Petrels from Cape Verde and Madeira, Trinidade Petrels which breed 7,700 Km to the southeast, at Trinidade and Martin Vaz Islands, Bermuda Petrels, which were thought to be extinct for 300 years until a handful were discovered nesting on offshore rocks in Bermuda, and Black-Capped Petrels, which once nested on islands around the Caribbean and are now hanging on in Haiti by nesting in inaccessible cliffs hundreds of meters in the air.

Since the 1980's, oil companies have been lobbying to open the continental slope of North Carolina including "The Point" to drilling, and Dave has been a leading voice of opposition. Here's an article from the Wilmington Star-News in 1989. Note that oil drillers have used the same lines about safe drilling for years. Let's hope this idea of opening North Carolina's Outer Banks to offshore drilling will now go away in light of the Horizon disaster, but I'm not holding my breath.
Posted by Will Mackin at 7:09 AM 0 comments

Projected Path of Surface Oil mirrors the path of Shearwaters 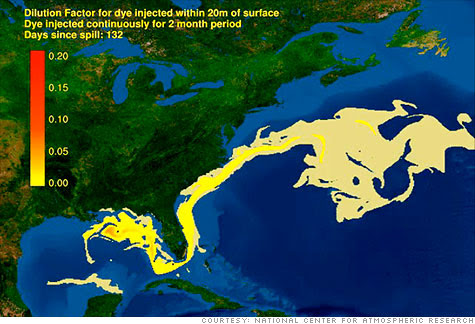 If it behaves like the virtual dye simulated in this study, the surface oil will be lingering exactly in the primary foraging area for August and September of Audubon's Shearwaters and White-tailed Tropicbirds, along with Black-Capped Petrels, Bermuda Petrels, and other rare seabirds. It should also show up in the Cay Sal Bank and the coast of Cuba. All the East Coast beaches and fisheries to Cape Hatteras will also get high concentrations of fouled water with PAHs that can linger and contaminate animals like shrimp and oysters long after the tar balls are gone. This model can't account for storms or fronts. Where the huge plumes of undersea oil will go is another question entirely.
Posted by Will Mackin at 6:20 AM 0 comments