We too care about Laughing Gulls

At the Society for the Conservation and Study of Caribbean Birds meeting in Grenada in July 2013, the Seabird Working Group of SCSCB hosted a symposium on seabird biology and preparations for the recovery efforts from the oil spill. I gave a talk about a paper a group of us have prepared on Priorities for Seabird Conservation in the Caribbean.

Apparently, I made a crack at the expense of one particular bird: The Laughing Gull. Although it was the most harmed bird in the spill, I am not advocating for restoring that species in the Caribbean. I did not intend to make light of the more than 3000 Laughing Gulls that were found dead in the cleanup efforts. I apologize for doing so.

I received some feedback about that talk that I will share here. I share it mostly because it is an important oversight of what I said at the talk and I need to clarify my careless words. I will redact information about the person who sent it to me to protect her anonymity.

A friend of mine who works for a "fancy" environment organization recently attended the birding meeting in Granada where you spoke. She says you made a joke about the brutal death of thousands of laughing gulls and then said "the laughing gulls didn't do anything wrong." Lots of people "snickered" and then later on when you talked about working together to save birds you made a point of saying there would be NO HELP FOR LAUGHING GULL PROJECTS with incoming funding. I have  lived my entire life in _______, State where I am a retired school teacher. The Gulf oil spill disgusted me and I was so pleased to hear that something was being done to help increase importance of these animals and to help protect them. I know I am not a "scientist" but a group of my friends-all older gals- LOVE gulls. In fact, these birds have been so therapuetic- helping see us through happy and sad times. We have nicknamed ourselves "the gull girls."
We love gulls, but we do not love you.  So your "scientists" may laugh, but these gulls are no laughing matter.  who mr. macky, do you think you are? We know who you are now and on behalf of the gulls, FLOCK YOU!
Sincerely,
Jane Doe"
Here is my response:

"I apologize for making light of the death of laughing gulls in the oil spill. I did not intend to disrespect this magnificent species, but if your friend came away with that impression, then  I failed to communicate well.

I was also devastated by the destruction from the oil spill and do not take any deaths lightly.

As far as restoration goes, Laughing Gulls will likely be restored in the Gulf area, and I support that action. In the Caribbean region, Laughing Gulls have increased over the last century. In general, this species does very well around humans and benefits from the extra food that humans provide. That fact in no way justifies their killing in the DWH disaster.

Laughing Gulls are actually a major predator of the other seabird species, taking eggs, chicks and even adults. Because many of those species have severely declined over the last century, our efforts in the Caribbean after the oil spill should focus on restoring other birds.

I take your opinion seriously and appreciate the fact that you contacted me with your concern. You are right to love Laughing Gulls, and i share your emotional connection to them and to seabirds in general. They are fantastic birds.

I will choose my words more carefully in the future. Too frequently, gulls are used as a punching bag for dismissive comments about wildlife, even by people who have the responsibility to protect them. They are great and beautiful animals and they deserve the full protection of the law.

Please relay this message to your friend and let me know of any other comments or questions you have. I will clarify my thoughts on Laughing Gulls to everyone in the Caribbean Seabird Working Group and on my blog and other forums.

I am giving a poster at the AOU meeting in Chicago. Here is a .jpg of the poster.

This poster describes results of five surveys for Audubon's Shearwaters in the Bahamas. From the low 95% confidence interval of the densities in those surveys, I project the total population on the many islands that we have not surveyed. The point is that we can be certain of about 7000 breeding pairs of shearwaters in the Caribbean, mostly in the Bahamas. Projections using the low 95% density indicate there are likely more than 33,000 breeding pairs. Finally, projections indicate that there were at least 1,000,000 breeding pairs of Audubon's Shearwaters in the Caribbean before the main island populations were extirpated and it is not unreasonable to think that there would have been 12,000,000 breeding pairs.This rare, secretive bird was a very common species and is not playing the ecological role as a top oceanic predator and disperser of nutrients to the soils of the Caribbean. Perhaps this lack of nutrients is a factor in the lack of recovery of soils that were cleared by Europeans? 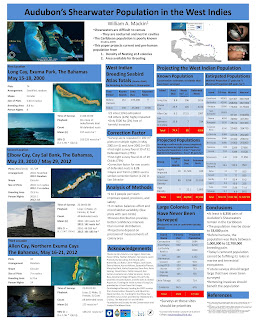