Saving Fluffy - a tropicbird who fledged too soon 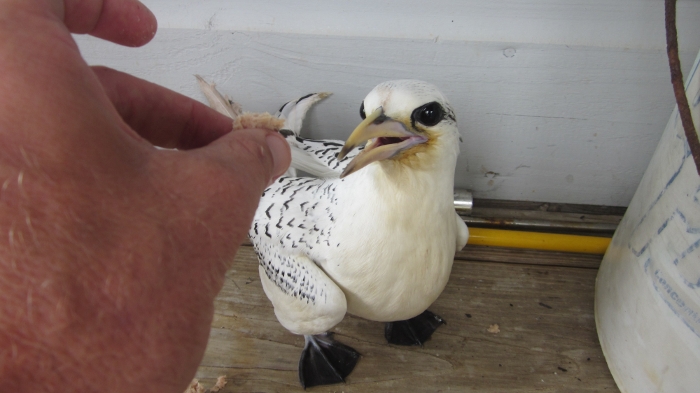 Recently, my friends at the Bahamas National Trust's Exuma Cays Land and Sea Park emailed me for advice about a young White-tailed Tropicbird that was saved from drowning by a boat captain (Captain Mark). The bird was probably hatched on Hog Cay, a nice tropicbird and shearwater colony at the southern tip of Warderick Wells.

On August 13, 2012, Captain Mark and his crew saved the listless and waterlogged chick from the water, named it "Fluffy," and fed it (squid, canned fish, and other seafood) on their deck for about a week. Before they left the Park, they took the bird to the park headquarters, where the warden continued to feed the hungry chick.

White-tailed Tropicbirds are vulnerable and rare, but they actually do quite well around people as long as you don't have dogs, cats, rats, or other invasive species running loose on the island. The most vulnerable point of a tropicbird's life is that period between when its parents abandon it until the bird teaches itself to find enough food to survive. If it lives through that early childhood, it could live for decades. That extra food and time provided by Captain Mark and the Exuma Park may have given the bird enough energy to survive through the hard times ahead.

While I don't want to encourage amateur bird lovers to begin programmes of rescuing young tropicbirds, this type of one-time opportunity must have been a fantastic experience for the people participating in the charter and for the boat's crew and captain - not to mention how great it was for the bird.

The methodology used - moving a chick to a different site and feeding it until it fledges - is actually quite similar to how seabird conservation experts encourage seabirds to form new populations at safe, protected colonies where they can be monitored.

Thus, the Exuma Park might want to put some artificial nest cavities around the ranger station. This is a good, safe site with no introduced predators, and Dave Lee and David Wingate are developing a low-cost artificial nest. Perhaps we'll install a few at the Park next year? I would not be surprised if our friend Fluffy returns and tries to nest near the park headquarters or at Hog Cay in about 4 or 5 years.

If someone reading this post wants to help stop the decline of tropicbirds, installing ideal, safe nesting sites near active breeding colonies has worked very well in Bermuda and could bring breeding tropicbirds close to your safe (dog- and cat-free) island.

According to the Exuma Park Warden, who fed Fluffy for a few more days,

"The tropic bird flew away on his own a few days after you dropped him off.  I set up a little fort for him under my grill on the deck.  It had bars around three sides and he was pretty happy in there.  He ate a lot and was pretty active stretching his wings.  He'd occasionally wander out and I'd put him back.  Then late one afternoon [~August 22], he walked all the way to the front of the house, did a leap of faith and flew all the way over to the island on the other side of the mooring field.  That was the last I saw of him." 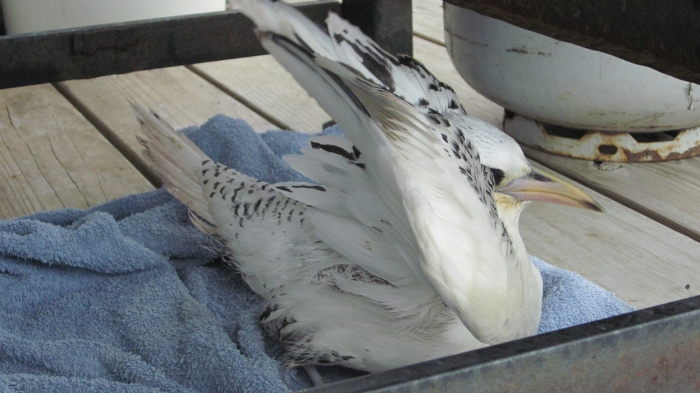